The roots of custom bikes, or lets say choppers, go back to the end of the sixties, when American rockers chopped their machines to pieces and put them back together in a different form. 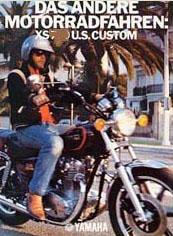 In a German leaflet 1978: the other way of motorcycling

Yamaha was one of the first big manufacturers to pick up the trend of custom in the middle of the seventies. In the US, the average motorcyclist, who had nothing in common with the rockers, realized the comfort and relaxation these custom machines had. The demand for bikes with high handlebars and low seat height grew steady in the US.

Pulse: the P-Twin in the seventies

It started with XS 650 Custom
The first suitable machine from Yamaha was the XS 650 Custom. The Parallel twin had a suitable character and pulled like a steam hammer from low revolutions. That 's what custom riders like. Not speed or performance is priority, but a tractor-like engine and a cool riding position. These elements carry the success of custom bikes until today. Next to the XS 650 twin Yamaha launched a few 3 and 4 cylinder machines. They could never repeat the success of the twin.

In the eighties: V-twin as next logic step

Midnight Special: own style in 1982

V-twin: the next logic step
Yamaha developed an air-cooled twin in the early eighties. The XV 1000 was the next evolution in custom design with drop tank shape and a longer front fork. The V-twin had much improved in character and pulse. The XV 1000 Midnight Special, with its fully black body was a milestone in Yamaha custom development and helped custom fashion to swap over from the US to Europe. Sales of these machines have increased steadily over the past 20 years in most European countries.

A custom for everyone: XV 535
In 1988 the custom boom got a new boost. The XV 535 hit the heart of many custom fans. The first small Virago looked like a much bigger bike and had all the features custom riders dreamed of: drop-shaped tank, low and long looks, fat rear tire, chrome parts, dual slash-cut exhaust pipes and so on. The XV 535 soon became the universal middle class machine for beginners as well as for riders who looked for an affordable but cool machine.
The XV 1100 one year later attracted many step up customers too. Since custom bikes were amongst the top sellers year after year this segment became quite competitive.

10 years later: a new generation
Yamaha launched a new custom series in 1998 with the XVS 650 Drag Star. 10 years after the XV 535 was introduced, the new 650 cc V-twin offered even more pulse and character. The low and long design with its new features made the Drag Star Yamaha's best selling machine in this class. One year later the bigger XVS1100 followed.

In 1999 Yamaha presented its biggest custom machine at the time, the XV 1600 Wild Star. This ultra large V-twin featured a push-rod engine layout to shorten the length of the huge cylinders and offered pulling power in the highest gear. Once out of town, the rider can enjoy the torque and engine pulse in high gear in almost every speed range. Since custom riders enjoy to customize their machines, Yamaha decided to offer a wide range of accessories like windshield, side bags, chrome parts, etc.

During the last 20 years custom has become an established category and will carry the styling and image of the "classic" motorcycle into the 21st century!