Wheelbase, trail and caster – and why they matter.
To many people, motorcycle chassis geometry is something of a mystery that is best left to the experts. Some riders may have no interest in it at all – they just want to get on their bike and ride, and there’s nothing wrong with this attitude!
Others would like to understand the basics of chassis geometry – if only to satisfy their natural interest in anything relating to motorcycles. Then there are those riders who like to study every minute detail of a bike’s technical specifications.

We’re not pretending that this feature covers the subject in detail. There are many excellent books which cover the subject in depth. Our aim is to take a look at wheelbase, trail and caster, and to show how they affect many aspects of a motorcycle’s handling performance, and in particular its turning, agility and directional stability.

It isn’t glamorous – but it makes a real difference!
Apart from anything else, chassis geometry is arguably one of the least glamorous aspects of motorcycle design. When was the last time you heard someone getting excited about their bike’s caster angle? It’s probably fair to say that just about everyone who sees a machine like the new 2006 model R6 is far more likely to be attracted by the bike’s styling, power output and advanced technology than its 97mm trail or 1380mm wheelbase!

Features like the slipper clutch and the new Y-CCT ‘fly-by-wire’ throttle are guaranteed to create a lot of interest in the motorcycle world – and it’s entirely understandable that these high-profile features are going to be the focus of attention.

However, although chassis geometry is rarely a headline grabber, the role it plays in the handling performance of every motorcycle cannot be understated. This feature is designed to give you a general overview of how chassis geometry affects the way your motorcycle works, and why it is so important.

Wheelbase. Is shorter better than longer?
Wheelbase is defined as the distance between the centres of the front wheel and rear wheel – and like trail and caster values (which we deal with later) it can tell you a lot about the potential chassis characteristics of any motorcycle – before you’ve ever ridden it.

Typically, a shorter wheelbase translates into increased agility and quicker, easier turning properties, while a longer wheelbase will usually give higher levels of directional stability.

For example, if you were to ride two different Yamaha models around the same bend, you would find that they require quite different steering angles and levels of effort. 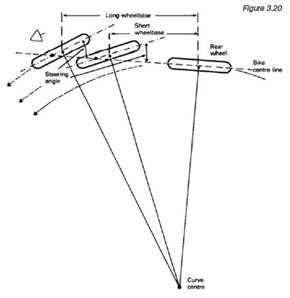 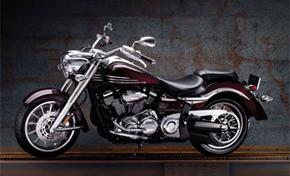 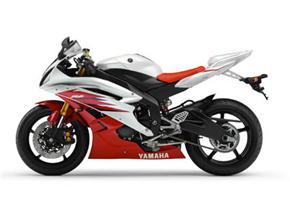 Short versus long
Let’s say you choose two completely different models on which to do the test – a 2006 R6 and a 2006 XV1900. With its short wheelbase of only 1380mm a bike like the new YZF-R6 supersport would need a smaller turn angle than the new XV1900 Midnight Star cruiser, which has a long wheelbase of 1715mm. And you would also notice how the shorter wheelbase bike required less effort to turn into the bend than the longer wheelbase machine. (See figure 3.20)

So how do Yamaha decide on how short or long the wheelbase will be on a new model?

Well, like every aspect of motorcycle and scooter design, the general specification of the chassis is determined by the use for which the bike is intended, and the precise dimensions are finalised following intensive development in the laboratory and on the test track.

We have listed a selection of Yamaha models starting with the shortest wheelbase bikes at the beginning, with the longest at the end.

If you take a look at the wheelbase values for these Yamaha 2006 models, a general pattern emerges. Clearly, the R-series supersport machines have the shortest wheelbases, followed closely by our FZ Fazer sports bikes.

The FJR1300A sport tourer sits somewhere in the middle of the range, while our XV cruiser models have by far the longest wheelbase values, with the XV1900 Midnight Star’s being 24% longer than the new YZF-R6!

Now consider the typical use for which each of these models was designed. At one end of the spectrum we have the short-wheelbase R-series models which are aimed at extreme supersport riders who demand super-responsive handling and class-leading agility.

The relatively compact wheelbase of the FZ Fazer sports models makes for agile handing and good all-round versatility – while the mid-range 1550mm wheelbase on the FJR1300A Sports Tourer is designed to give sure-footed roadholding and good directional stability.

In contrast, Yamaha’s XV Cruiser models are designed for riders who are looking for relaxed riding and gentle handling, and the extra-long wheelbase featured on these big V-twins plays an important role in achieving these qualities.

Wheelbase plays a significant – although by no means exclusive – role in shaping the characteristics of a chassis. So the next time you look at any bike’s technical specification, the wheelbase value should give you some indication of how it will handle, and whether it could be the kind of motorcycle that you are looking for. 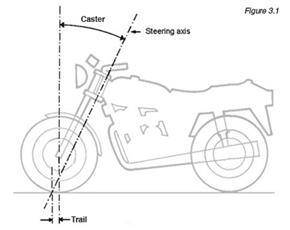 Trail. What is it and what does it do?
Trail is defined as the distance between the centre of the front tyre’s contact patch and the point where the steering axis meets the ground. (See figure 3. 1)

Virtually every motorcycle and bicycle ever designed has a trail value, and this is what gives the front wheel a caster or self-centring effect when in motion. In other words, a machine being ridden in a straight line is designed to continue travelling in a straight line unless other forces are brought to bear upon it. These forces may be rider inputs such as steering or leaning, or external forces like crosswinds or road cambers.
Trail creates a certain level of steering stability, and so by altering trail, a chassis designer can ‘tune’ the handling characteristics of any motorcycle to suit the purpose for which the motorcycle has been designed.

Generally speaking, supersport bikes like Yamaha’s R-series bikes tend to have the smallest trail values, while cruisers like the XV models have the greatest trail measurements.

For example, the quick-handling 2006 R-series models run with only 97mm of trail, while the ’06 XV1900 Midnight Star runs with a trail of 152mm for more relaxed chassis characteristics and less sensitive steering.

But there is one model with an even shorter wheelbase than Yamaha’s R-series models – and it is not a supersport bike!

That machine is the new 2006 Tricker, and it has the shortest trail of any road-legal Yamaha motorcycle. So why does it have such a short trail? Well, the Tricker is a totally new kind of Street model that is designed as a multi-purpose urban fun bike and commuter bike.

As well as being an easy bike for beginners to use, the Tricker is also aimed at expert riders who want to do off road trick riding. Its combination of a short 1330mm wheelbase, 95mm trail and steep 25.4 degree caster ensure high levels of agility at low speeds, which make it ideal for urban commuting through congested streets. And the combination of a slim chassis, punchy engine and ultra compact dimensions also make this the ultimate trick riding bike. 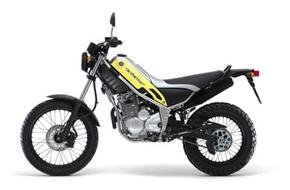 Caster, and its role in agility and stability.
Caster (sometimes referred to as rake) is the angle between the steering axis and an imaginary perpendicular line running through the front wheel axle. (See figure 3:1) As we have already seen, a motorcycle’s trail measurement plays a crucial role in achieving chassis stability, and it is the caster angle (among others) that helps to determine trail.

Once again, it’s useful to take a look at the relative caster values of a number of different Yamaha models to see if a general pattern emerges.

Again, the pattern is that supersport bikes have the smallest caster value, or to put it another way, the steepest steering angle. With its race-developed short-wheelbase Deltabox chassis, the R1 has a relatively extreme caster angle of 24 degrees. This bike also has a short trail and short wheelbase, and this combination is what makes the R1 – and R6 – two of the most agile handling motorcycles ever built by Yamaha.

At the other end of the scale is our new-for-2006 long-wheelbase XV1900 Midnight Star, which runs with a caster of just over 31 degrees. So, while the R1 has been built for optimum agility and quick directional changes, the Midnight Star is designed to offer its rider unrivalled levels of luxury and excellent directional stability.

As you can see from the chart, the 2006 Street and Sport Touring models feature caster values that are only slightly greater than the supersport bikes, and dramatically lower than the cruisers. This underlines how our Street and Sport Touring models have been designed to offer agile handling, while their degree of directional stability has been ‘fine tuned’ by selecting trail and wheelbase values to suit their intended uses.

Enhancing the experience
Motorcycle chassis geometry is never going to be the first thing that comes into your mind when you see a new Yamaha. But we hope that this brief overview of wheelbase, trail and caster helps you to see every motorcycle in a different way.

Of course, what every rider really cares about is how their machines looks, handles and performs – and we hope that by helping you understand why they behave in the way they do, it can only help to enhance your next two-wheeled experience.