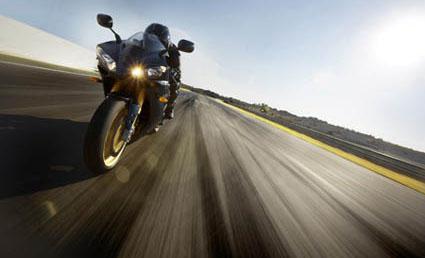 Motorcycle and rider aerodynamics
Aerodynamics is defined as the interaction between airflow and the movement of solid bodies through air. Everything that moves through air – as well as stationary objects which are subjected to moving air – are affected by the principles of aerodynamics.
Anyone who has ever ridden a motorcycle cannot fail to appreciate the enormous forces associated with the air that the rider and machine have to push through when travelling at speed. More than any other form of motorised transport, the motorcyclist is exposed to the elements to a greater or lesser degree – depending upon the model type – and this direct connection with the environment is one of the factors that makes motorcycling such an exciting and enjoyable leisure pursuit.

Even at lower speeds the drag created by a motorcycle and its rider has a substantial effect on performance and stability – and at higher speeds, drag plays the most significant role in determining a motorcycle's overall performance characteristics. In fact, drag consumes the vast majority of your engine's power output at higher speeds, as your machines fights against the wall of air that it has to punch through.

In this feature on Motorcycle and rider aerodynamics, we take a look at the nature of the relationship between you, your bike and the air around you, and we outline the relationships between airflow, speed, power and frontal area that are at work every time you ride. 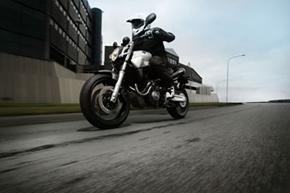 2006 Yamaha MT-03's upright riding position and wide handlebars give a larger frontal area than a model like the YZF-R1.

Frontal area and its relationship with drag
Motorcycles comes in all shapes and sizes, from supersport models with full fairings like the YZF-R1, through to taller, unfaired machines such as the MT-03 big single. Even without a rider on board, the R1's slim profile and race-developed fairing result in a much smaller frontal area than the naked MT-03. And with the rider on board, the difference in the amount of drag experienced by these two diverse models is even greater.

Therefore, when considering the aerodynamic efficiency of any powered two wheeler, the frontal area of the motorcycle is just one factor to take into account, and it is important to remember that the rider's seating position and body size play a significant role in the creation of drag. Similarly, other factors such as the fitment of luggage, the carrying of a passenger, the choice of riding gear and screen size will also affect aerodynamics. 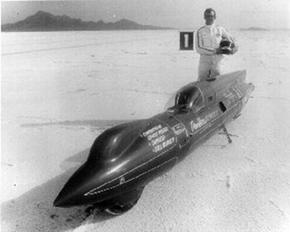 Don Vesco and his Original #11 Motorcycle Streamliner in which he became the first person to drive a motorcycle at more than 250mph/403kph on September 17th 1970. Power was provided by twin Yamaha 350cc engines. 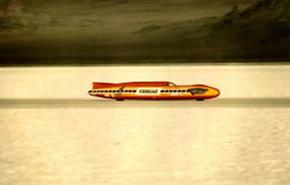 The figures are even more remarkable when you take a look at the extra power that is required in order to increase a motorcycle's speed. In this instance, the additional power required is proportional to the third power of the speed – or in plain language, a doubling in speed requires power to be increased by eight hundred per cent!

The principle that massive increases in power are required for relatively small increases in top speed is best illustrated by looking at the world of motorcycle land speed record breaking. With their long, thin bodywork and extremely low frontal area, these motorcycles are the most aerodynamically efficient two wheelers ever built. Yet despite their 'slippery' low-drag bodywork, these machines still require huge increases in power to push the land speed record up by a relatively small margin.

Don Vesco is widely recognised as one of the world's most famous land speed record breakers on two and four wheels, and Team Vesco developed some outstanding Yamaha-powered streamlined machines in the 1970s.

Comparing the two streamlined machines, it can be seen that in order to raise the top speed by just over 50mph/80kph – the equivalent to a 25% increase in velocity – Team Vesco had to increase engine capacity by over 100%, from 700cc to 1500cc. 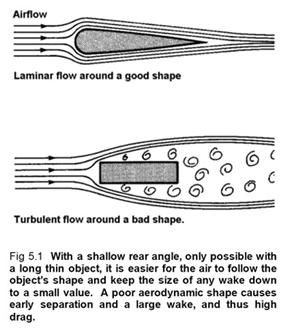 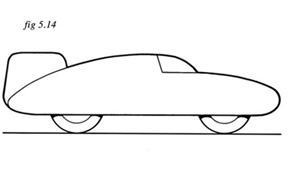 The ideal streamlined body shape
As we have already seen, the amount of drag created by an object moving through the air is directly proportional to the object's frontal area, and so it follows that the most aerodynamically efficient motorcycle would have a low and narrow front.

However, achieving high aerodynamic efficiency involves more than creating a low frontal area. Wind tunnel tests demonstrate that a long, thin teardrop shaped object which allows the air to flow around it with minimal disturbance creates the least amount of drag.

Figure 5.1 shows how the air flows around a 'good' aerodynamic shape. Here we can see that the air passing the teardrop shape flows smoothly around the front and merges at the rear of the tail in an orderly fashion, without creating eddies. This type of flow is known as laminar, and in a perfect world every motorcycle would be able to achieve this. In contrast, the lower image illustrates the air flow around a 'bad' shape, which shows how the air flow is badly disturbed by the rectangular-shaped object. Unlike the air flow around the 'good' shape, the air passing the 'bad' shape does not maintain a smooth and efficient laminar flow around the object, but instead it forms a large wake and creates many small eddies.

As much as Yamaha's motorcycle designers would love to create machines with ultra-low drag, they are constrained by the fact that such a machine would end up looking like a Land Speed Record motorcycle. And the rider would experience all of the impracticalities that are associated with these long, low and narrow machines with their fully-enclosed bodywork. (see Fig. 5.14; Tony Foale, 2002)

Practical considerations in motorcycle body design
Yamaha's designers have to take into account many diverse factors including rider and passenger comfort, manoeuvrability, suspension travel, weight distribution, fuel capacity, luggage capacity, engine accessibility and ease of maintenance when designing every motorcycle. These factors – and many other considerations – are what shape the modern motorcycle. 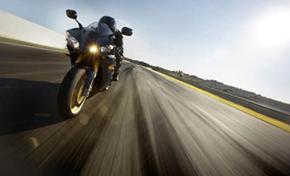 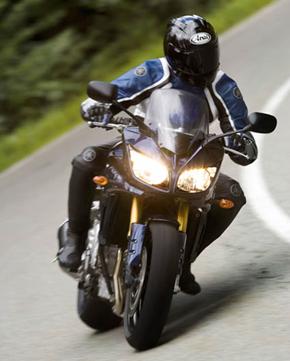 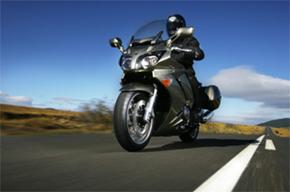 R-series Supersport models
Performance is a top priority on Yamaha's supersport models such as the YZF-R1 and radical new YZF-R6, and so our design teams have placed much emphasis on achieving an aerodynamically-efficient body shape. In addition to the low frontal area, the R1 and R6 bodywork is kept as narrow as possible, while the slim tail is designed to minimise turbulence. The riding position is also crucial to attaining high levels of aerodynamic efficiency, and the seat/handlebar/footrest relationship has been developed to reduce the levels of rider-induced drag while also achieving an idealised front/rear weight distribution. Aerodynamic efficiency has also been enhanced by the use of underseat exhausts on the R1, and by the use of a new ultra-short muffler exiting beneath the engine on the new R6. Both of these designs reduce turbulence compared to the traditional externally-mounted muffler featured on earlier R-series models.

FZ Fazer and TDM Sports models
On our 2006 Sports models, the design goals were to achieve strong performance together with high levels of comfort and class-leading versatility. So, with the FZ1 Fazer, TDM900/A and FZ6 Fazer ABS, the function of the bodywork is not only to ensure efficient aerodynamics, but also to ensure good wind and weather protection for the rider and passenger.

FJR1300A/AS Sports Tourer models
In the Sports Tourer class, high levels of luxury and long-distance comfort are regarded as essential, with riders and their passengers typically spending many hours in the saddle, often covering thousands of kilometres in one vacation.

For this reason the new 2006 FJR1300A and the innovative new semi-automatic FJR1300AS feature wind-beating bodywork and adjustable screens. Unlike the R-series models where low frontal area is a priority, the FJR models have a relatively large frontal area that has been designed to deflect wind away from the rider and yet still achieve good levels of aerodynamic efficiency.

For 2006, the mid-section of the FJR's fairing features a two-step adjuster that increases width by 30mm in order to adjust the airflow to suit different riders.

Power versus drag – an ongoing battle!
Man's ongoing battle against drag has shaped the design of almost everything that moves – from downhill skiers' helmets through to high speed trains – and of course, motorcycles. Of course, some models offer vastly superior aerodynamics when compared to other bikes, but whatever you ride, you're never going to escape from the blast of fresh air that makes motorcycling such a truly exhilarating experience!