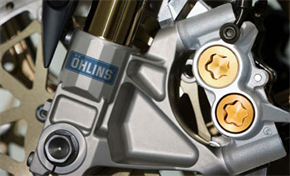 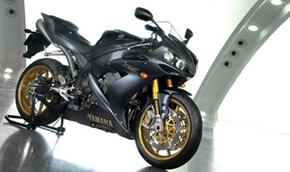 2006 YZF-R1SP is equipped with a range of high specification components, including Öhlins front and rear suspension.

Motorcycle front suspension – design and operation
With over fifty years experience in the design and manufacture of some of the world’s most innovative and exciting motorcycles and scooters, Yamaha is widely recognised as a leading force in the development of front and rear suspension systems.

During this period our machines have been equipped with a wide range of different front suspension systems, from the trailing link system seen on the YA-2 in 1957, through to the innovative hub centre steering design featured on our ground breaking GTS1000 Sports Tourer in the 1990s. However, with the exception of some of our smaller scooters, the telescopic fork is the most popular design in use today. 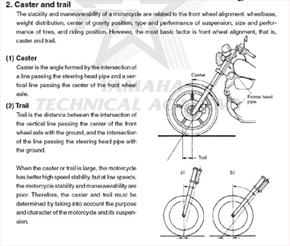 Characteristics of the modern telescopic fork design
With over fifty years of development behind it, the telescopic fork design has come a long way since it first appeared, and perhaps the secret of its success is its relatively simple construction, low number of moving parts, and ease of maintenance and adjustability. And of course, telescopic forks – both conventional and upside down – are widely regarded as being the most attractive design available today.

The very nature of their design means telescopic forks are subjected to enormous forces. In effect, the forks act as a lever upon the chassis. This leverage is at its most extreme during front wheel braking, when the force is transmitted into the frame via the steering head.

As front braking increases, the forces experienced by the chassis increase proportionally, and Yamaha’s latest generation of Deltabox frames are designed to handle these massive loads with ease. You only have to watch a MotoGP machine during heavy braking and you will see that the leverage transmitted though the chassis is enough to lift the rear wheel at over 200kph.

The relatively simple layout of the telescopic fork also enables motorcycle designers to alter basic chassis geometry with relative ease. Trail can be increased or decreased by changing the triple clamp offset, or by the use of an offset axle. Wheelbase is also relatively easy to change by making small changes to the front forks, and so it can be seen that from a manufacturer’s point of view, the telescopic fork gives greater freedom in chassis design. However, the whole set-up of the bike should be in balance. As you can understand; changes in the front, can have a huge impact on the forces in the frame. Therefore the design of the frame should be in balance with the front fork. For the swing arm applies the same; a change in the swing arm will have to be in balance with the frame. Yamaha engineers always search for the perfect balance from the front to the rear. 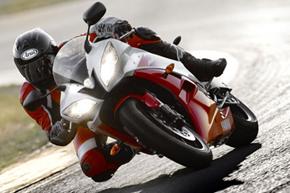 The 2006 Yamaha YZF-R6 is equipped with the latest USD forks whose high level of rigidity contributes to the bike’s class-leading handling performance on the street and track.

Upside down (USD) forks
In the last decade the introduction of a new generation of supersport machines with hugely powerful engines, high rigidity chassis designs and race developed front braking systems has transformed the motorcycle marketplace.

Manufacturers invest great resources in suspension development, and to keep pace with the sophisticated new engine and chassis designs, Yamaha introduced the upside down (USD) fork design on many of its high performance bikes and off road competition models.

The advantage of the upside down design is that the larger diameter outer tubes are held by the triple clamps, while the fork inner tubes are attached to the wheel axle. This layout makes for greatly increased front fork rigidity by allowing the use of longer inner fork tubes which increase overlap.

Much attention has also been paid to the front wheel axle design, and all high performance road and off road Yamahas with USD forks are equipped with a large diameter hollow axle which is designed to give optimal rigidity to complement the inherent strength of the new-generation USD forks.
Many of the latest generation forks – USD and conventional – also feature sophisticated cartridge type damping mechanisms which allow for fine tuning of the damping characteristics, allowing the rider to select an idealised set up for almost any riding situation.

Other developments found on the latest USD forks include the use of special low friction oil seals, and specially developed fork tube coatings that are designed to give smoother suspension operation.

This diagram of the latest Öhlins Superbike front forks shows the internal components of these high specification USD forks.

The future
While other front suspension systems have come and gone, the development of the telescopic fork design has continued for over fifty years. Today’s designs, both conventional and USD, offer remarkable levels of rigidity combined with excellent shock absorbing qualities. While there will always be room for other less conventional designs for specialist applications, the telescopic fork looks sure to be an integral part of motorcycle design for a long time.

Yamaha are working closely with manufacturers such as Öhlins to develop the next generation of front and rear suspension systems, and over the next decade we can expect to see further advances in the design of the telescopic front forks.

The Yamaha YD-1 was one of the first Yamaha models to feature telescopic forks with external coil springs protected by shrouds.

Launched in 1968, the DT-1 was the first Yamaha to be equipped with second generation forks with increased travel and internal springs. 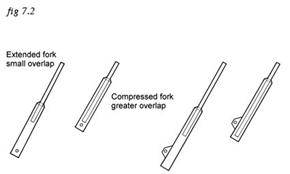 This illustration shows the principle of ‘overlap’ on conventional telescopic forks. The forks on the left represent a first generation telescopic fork design with reduced overlap at full extension. The illustration on the right shows how longer travel forks, as well as standard travel forks with an offset axle, give greater overlap and therefore higher rigidity.

A brief history of telescopic forks

The first generation
The telescopic front fork design was first used in large numbers on production motorcycles as far back as the 1950s, and this proven and efficient system is one of the most successful and enduring designs in the two-wheeled world. Many other front suspension systems have been used my various manufacturers over the years, including Yamaha, and yet the telescopic front fork remains as the most popular and effective design for the vast majority of motorcycles.

The first generation of telescopic front forks featured steel tubes – held at the headstock by the bike’s triple clamps – moving up and down inside steel or aluminium sliders. Early designs were equipped with external coil springs which were usually protected by an outer steel shroud.

The damping system on these first generation forks usually consisted of a damper rod featuring one set of holes for compression damping and another set of holes for rebound damping. Typically most earlier machines offered little or no choice in damping settings, and if riders wanted to increase or decrease their front suspension’s damping characteristics it was necessary to alter the grade of fork oil.

The second generation – internal springs and longer travel
In 1968 Yamaha was one of the first Japanese manufacturers to equip a production machine with the Ceriani-type front fork, when it launched the DT-1 trail bike. These front forks represented a major leap forward in design and handling performance, especially in off-road situations.

These second generation telescopic forks had longer internal coil springs, which eliminated the need for the ugly and heavy external spring shrouds associated with the earlier designs. Another major advantage of these new front forks was that they offered increased suspension travel, a crucial feature on a machine like the dual-purpose DT1.

The long-travel design also improved fork rigidity by increasing the ‘overlap’ or length of tube that was in contact with the inside of the slider. They also carried a larger quantity of damping oil which dissipated heat more effectively and ensured more stable damping performance.

And with hidden internal springs, these second generation forks were lighter and far more attractive than the earlier designs, and made for a much slimmer and sportier looking front end.

Front forks with offset axle design
Further developments to these second generation telescopic forks included the use of offset wheel axles, which were usually located in front of the fork slider – although a small number of machines have featured a rear offset axle.

This offset axle design allows the fork tube to extend much further into the slider on full compression, that is, when the forks are ‘bottomed out’. (see fig. 7.2.) On full extension (when the forks are ‘topped out’) there is still a substantial length of the tube inside the slider. This greater overlap between the tube and slider gives increased front end rigidity, and therefore enhances handling qualities. Another advantage of this design is that it facilitates increased front suspension travel, and this is one of the reasons that the front offset axle design is seen on so many adventure sport and off road machines.