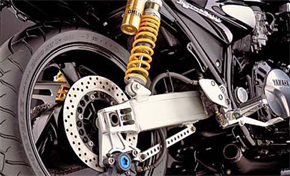 The 2006 Yamaha YZF-R1SP has one of the most advanced suspension packages featured on a production motorcycle. 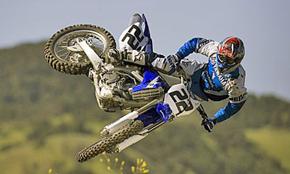 The Yamaha YZ450F is one of today’s most advanced motocross machines, and features state-of-the-art link-type rear suspension.

The XJR1300 is equipped with twin Öhlins rear shocks. 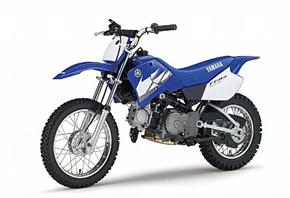 The TT-R90’s Monocross rear suspension is strong, light and easy to maintain.

Design and operation
In the same way that the telescopic front fork has become the predominant design for motorcycle front suspension, the swinging arm system is today’s leading rear suspension system. In one form or another, the swinging arm design – whose more accurate technical description is the trailing pivoted arm – is used on every Yamaha motorcycle and scooter.

However, while there are essentially only two basic telescopic front fork designs – upside down and conventional – there are a number of swinging arm rear suspension systems.

Link-type single shock rear suspension
Link-type rear suspension is featured on the vast majority of Yamaha road and off road motorcycles, and this system is undoubtedly the most popular design used today.

First introduced by Yamaha in the 1980s, this highly effective design features a pivot mounted behind the engine, with two arms running either side of the rear wheel. On supersports, sports and competition models the swinging arm is usually manufactured from aluminium, while steel box section or tubing is featured on some other bikes.

The link-type rear suspension system features a single shock absorber which is usually mounted close to the pivot, and is usually fixed in an upright position – although on some models the shock is positioned horizontally.

The top of the single shock absorber is mounted to the main frame, while the base of the shock is connected to a link system mounted beneath the swinging arm. This link system consists of a rocker and link arms which are designed to give progressive operating characteristics to the rear suspension. In other words, the link system will usually be designed so that the initial suspension movement starts off quite soft, but gets progressively firmer as the shock absorber is compressed further.

Link-type rear suspension offers many advantages, including good centralisation of mass and improved aerodynamics, both of which help to enhance performance. This rear suspension system has also given Yamaha’s designers greater freedom in developing new concepts such as the ultra-long swinging arms used on the R-series models, and has also allowed the development of class-leading off road suspension systems which have helped Yamaha riders to win both the world MX1 and MX2 Motocross World Championships in 2005.

Commonly referred to as a ‘twin-shock’ design, this proven system has been used by motorcycle manufacturers for around fifty years, and the fact that the twin shock layout has been used for such a long period of time underlines its excellent design.

With its traditional appearance, the twin shock layout is ideal for machines like the XJR1300, which combines retro style with modern technology.

Monocross rear suspension
Monocross rear suspension is used on some of Yamaha’s smaller capacity off road fun bikes, and combines high strength with low weight. This system features a sturdy triangulated swinging arm mounted directly to a single shock which is positioned at an angle of around 45 degrees. Its high levels of rigidity make it ideal for off road use, and the single shock design helps to centralise mass for easy handling. 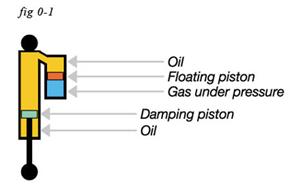 The basic internal structure of a typical shock absorber with an external ‘piggyback’ reservoir. 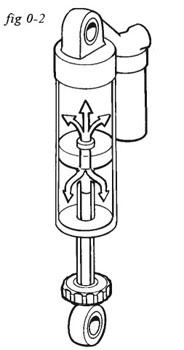 Flow through the rebound and compression needle valves. 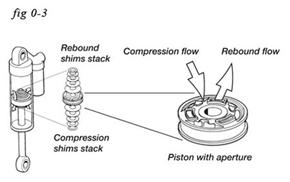 Shock absorbers
Whether your Yamaha has a link-type, twin shock, Monocross or single-sided rear suspension system, its performance characteristics will be affected by the design and set-up of the shock absorber.

Although there are a number of different types of shock absorber, for the purposes of this feature we will look at the workings of a fully-adjustable ‘de Carbon’ type system with an external reservoir, which is one of the most popular high-performance designs in use today. The external reservoir can be a ‘piggy-back’ type which is mounted to the shock’s body, or it can be linked to the shock’s body via a flexible hose.

The shock is made up of an outer body which contains a damper rod, a damper piston, suspension fluid, a floating piston, pressurised nitrogen, and rebound and compression damping valves and shim stacks.

The damping oil is kept under pressure by the pressurised nitrogen, and to prevent cavitation (the mixing of the gas and suspension fluid), they are kept separate by a floating piston. (See fig O-1). Wrapped around the shock body is an external coil spring which supports the weight of the bike and rider, and soaks up bumps.

In order to illustrate what is happening when you ride your machine, we will take a look at the internal workings of a shock absorber in a variety of conditions.

Riding gently along a flat road
Imagine that you are riding your Yamaha quite gently along a fairly straight and flat road. You will be enjoying a comfortable ride, and the suspension’s damper shaft will only be experiencing small and slow movements.

In this situation the damper piston is moving very gently through the suspension fluid, and the rebound and compression damping needle valves will have relatively small volumes of fluid passing through them. (See fig. O-2) These small valves are designed to handle this type of relaxed riding, and you will barely notice the subtle suspension movements that are going on beneath you.

Riding faster on a bumpy surface
Now you are riding faster over an uneven surface. As soon as your rear wheel hits a large bump, the shock is compressed all the way to its limit in a fraction of a second.

In this situation the damper piston is trying to move extremely rapidly through the suspension fluid, but the fluid is physically unable to pass through the small compression valve quickly enough. As the pressure of the ‘trapped’ suspension fluid increases, the sudden increase in pressure forces the compression shim stack to open, letting a greater volume of fluid through, and subsequently allowing the damper piston to move. (See fig. O-3)

While all this is happening, the floating piston that separates the gas and suspension fluid is being forced to compress the nitrogen even further. Then, once the shock is fully compressed, the external coil spring forces the damper piston to rebound, allowing the highly pressurised nitrogen to force the suspension fluid back through the rebound valves. Once again, the small rebound valve is unable to handle the highly pressurised suspension fluid quickly enough, and so the rebound shim stack is forced open, allowing the damper piston to return to its fully extended position.

This whole cycle from fully compressed to fully extended may only take a fraction of a second, and can be repeated hundreds of times over a short length of bumpy road. 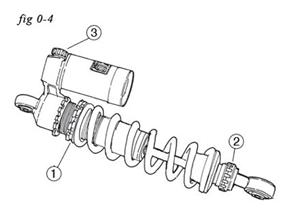 This illustration of an Öhlins shock shows the location of the two threaded rings (1) which can be adjusted to alter the spring preload. Also shown are the rebound (2) and compression (3) damping adjuster knobs.

Rear suspension set up
Many Yamaha motorcycle feature adjustable rear suspension, either for preload only, or for preload and also rebound and compression damping, and some of the highest specification models also feature low and high speed damping adjustment.

Depending upon your machine and your individual requirements, it is possible to make various adjustments to the shock that can improve rider and passenger comfort, and enhance handling performance.

Spring preload
Not all riders are the same – a light rider will compress the rear suspension less than a heavy rider, and this will affect the overall geometry of the moving machine. In order to ensure that your Yamaha chassis is running at its full potential, it may be necessary to adjust the rear suspension in order to achieve the correct balance of the bike.

For example, a rider weighing 100kg will compress the rear suspension more than a rider weighing 70kg. If both riders own an identical machine with identical suspension settings, the heavier rider would find that their machine would be running lower at the rear, and consequently the steering geometry and front/rear weight distribution may be adversely affected.

This imbalance can easily be corrected by adjusting the spring preload of the shock to suit different rider weights, and so the lighter/heavier rider can maintain the desired rider height by decreasing/increasing the preload accordingly. Riders carrying a passenger can also benefit from adjusting the preload.

The coil spring on a shock absorber is typically held in place at the top of the shock by two threaded rings which can be turned by using a large ‘C’ spanner. To adjust spring preload, the top locking ring first needs to be slackened off, allowing the lower ring to be loosened to decrease spring preload, or tightened to increase spring preload. (See fig O-4) On some machines the preload can be adjusted remotely by means of a simple adjuster knob.

Rebound damping
Unlike spring preload, which can be measured precisely, setting rebound (and compression) damping is often achieved by experimenting with a variety of small changes, and then deciding which setting works best for you. It is as much an art as a science, and no two riders will have an identical set up!

Having said that, there are a few basic principles which need to be considered. If your machine feels soft, bouncy and unstable on bumpy surfaces, it is advisable to increase the rebound damping by four clicks. Take another test ride over the same piece of road or track, and if it feels too harsh, back the rebound off by two clicks. Carry on with this process until you are happy with the characteristics.

Follow the same procedure if your bike feels too harsh over bumps, but this time decrease the damping by four clicks, and then if it is too soft after having done that, increase damping by two clicks. By a process of trial and error you will establish the best set up for your riding style.

Compression damping
If your bike’s handling feels soft, sluggish and bottoms out too frequently, it’s likely that the compression damping needs to be increased. As with rebound damping, stiffen it up by four clicks, take it for a test ride, and if it’s now too stiff, back it off by two clicks. Similarly, if the bike feels hard over uneven surfaces you should experiment with less compression damping, using the four clicks up/ two clicks down formula.

As we said, setting up suspension is a very personal matter, and what is right is what matters. Remember that even in MotoGP few riders ever agree about the best suspension set ups – and they are the world’s best riders with the world’s best technicians!