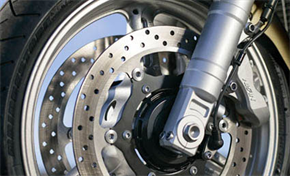 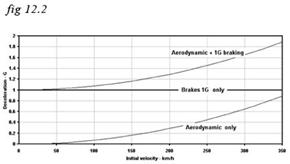 Figure 12.2 shows how aerodynamic drag plays a significant role in the deceleration of a theoretical race bike, contributing 11% of the braking force at 125km/h, rising sharply to 88% of braking force at 350km/h. For the purposes of this chart, braking force is expressed in G and the bike’s brakes are assumed to have a force of 1G.

Motorcycle brake design and performance has progressed enormously in the last decade or so, but how many of us actually think about what is happening when we use our right hand and foot to apply the brakes? In this feature we take a closer look at what actually goes on when you use your brakes, and we examine the workings of today’s main systems.

How do brakes work?
Every moving object has kinetic energy, and the level of this energy in a moving motorcycle is directly related to its mass and the square of its speed. In order to slow down from a high speed, the motorcycle and rider need to lose a certain amount of their kinetic energy – and to come to a complete stop, all of the kinetic energy has to be removed.

When you apply your bike’s brakes you are creating a high level of friction which has the effect of converting kinetic energy into heat energy. Consequently your machine slows down or comes to a halt, and the heat energy continues to be dissipated through the brake components, even after the event.

Of course, if you are riding along and you shut the throttle but do not apply the brakes, you will ultimately come to a stop – but after a much longer period of time. In this situation the deceleration is caused by a combination of factors including aerodynamic drag forces, friction in the engine, gearbox, transmission and wheel bearings – and the rolling resistance between your tyres and the road.

These additional deceleration forces are also present when you are braking, and so in effect, your brakes are not actually providing 100% of the stopping power. In fact, at higher speeds the proportion of stopping power contributed by aerodynamic drag can be over 10% of the total. If you’ve ever ridden a supersport bike you’ll know that by sitting upright when braking at high speed you can shorten your stopping distances. However, the additional braking effect of drag diminishes as your speed reduces, and is totally irrelevant below around 50km/h. (See Fig. 12.2) 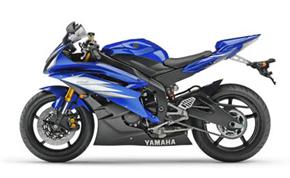 The 2006 R6 is equipped with radially-mounted front brake calipers for outstanding braking performance.

The disc itself is mounted to the front or rear wheel hub, and the brake pads are contained within a hydraulic caliper which is mounted to the front forks, or, for rear discs, adjacent to the swingarm. When you apply the front or rear brake lever the hydraulic pressure in the braking system increases, and this activates one or more pistons inside the caliper, which force the brake pads into contact with the disc. Friction is generated, and as we have seen, the bike’s kinetic energy is converted into heat, and the bike slows down. Of course, this is a simplified description of what happens when a disc brake is operated, and there are many different disc, caliper and pad designs.

Calipers
The hydraulic brake caliper can contain anything from one to six pistons, and their job is to force the disc pads on to the surface of the disc and generate friction, which slows the bike. There are two main types of caliper, and these are single-acting and double-acting.

The single-acting caliper usually has one or two pistons operating on one side of the disc, and this type of caliper needs to be able to move laterally in order to be able to grip the disc with its pads. Typically this type of caliper is mounted on two pins which allow a small sideways movement of the caliper when the brake is applied, and this design offers the advantage of being compact, inexpensive and relatively simple.

The double-acting caliper is used on high-performance machines, and usually features two pistons on each side of the disc, in what is often referred to as a four-pot opposed-piston design. The caliper is fixed rigidly to the forks and has no lateral movement. With this design, the only moving parts are the pistons which push the pads onto the disc. This system generates enormous stopping power, making it suitable for racing and high performance supersport machines.

Load transfer during braking
When both brakes are applied on a motorcycle there is an immediate load transfer towards the front of the machine. An extreme case of load transfer can be seen when riders like Valentino Rossi brake heavily into corners in MotoGP. As the rider applies the brakes you can see their front forks compress, and it is not unusual to see the rear wheel rise 5cm or more above the ground as the load is transferred to the front wheel.

Stunt riders also use front brake-induced load transfer to initiate a ‘stoppie’ where the bike is held stationary or even ridden forwards with the back wheel high above the ground.

However, although few road riders will ever experience this situation on their road machine, it is important to recognise that load transfer takes place every time you brake. This load transfer is the reason why front brakes are designed for higher performance compared to rear brakes.

Factors governing disc brake performance
The four main factors affecting performance of any disc brake system are the average working radius of the disc; the total caliper piston area; the coefficient of friction between the pads and the discs; and the hydraulic line pressure.

Generally speaking, high performance supersport bikes like the R1 and R6 will be equipped with large-diameter dual front discs which are usually gripped by 4-pot opposed-piston calipers fitted with high-friction pads. Meanwhile, less powerful machines such as the XT660X feature a smaller diameter single front disc and 2-piston caliper.

Every Yamaha’s braking system has been specifically developed to match factors including power output and overall machine weight. Therefore a good braking system is not necessarily the most powerful design, but is one that achieves the right level and balance of braking performance, and offers the right characteristics for any particular model.

Drum brakes
The drum brake is a proven and reliable design which is used on many motorcycles and scooters. This system consists of two semi-circular brake shoes located inside a drum in the wheel hub. When the brake lever is operated a cam inside the drum mechanism pushes the brake shoes into contact with the drum, and this creates friction and deceleration.

Although the disc brake system is used on all higher performance machines, the drum brake design is still used at the front and rear on lighter and lower performance models, where high levels of braking power are neither required nor desirable. 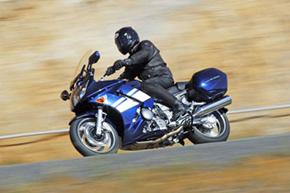 The 2006 Yamaha FJR1300A is equipped with an electronic ABS design.

ABS
Yamaha offer ABS (Anti-lock Braking System) on a number of models, and our electronic system is highly regarded by riders of all skill levels. The system features a series of sensors which are constantly monitoring wheel movement, and this data is instantly transmitted to an ECU especially dedicated to the ABS. As soon as wheel lock-up occurs, the ECU releases brake fluid pressure instantly in order to allow the wheel to continue turning, and then re-applies brake fluid pressure.

Basic Braking Guidelines
We’ve taken a look at the braking systems, so now let’s consider the most effective way to use them.

The first thing to remember is that the way you use your brake should always be determined by the road surface conditions. The performance of your brakes depends upon the level of grip between your tyres and the road surface, and so observation and awareness of your environment are crucial.

Professional riders seem to have a sixth sense about surface conditions because they are able to ‘feel’ what is going on beneath them through the bike’s chassis. However, few of us are lucky enough to have this ability, and so here are some of the things to look out for.

Diesel spills should be avoided, because they make the road surface slippery. If you see a dark line on a dry road, treat it with caution, and if possible ride around it. If you need to slow down or stop on a diesel spill you should apply the brakes gently, and remember that even when you get back to a clean road surface your tyres will need time to scrub off the diesel.

It goes without saying that wet roads don’t offer as much grip as dry roads, and riders should exercise caution. However, there are different kinds of wet road, and a short rain shower after a prolonged dry spell will often leave the road in a more slippery condition than a road that has been subjected to heavy storms. This is because the surface pollution from cars and trucks will mix with the rain after a light shower and stay on the surface, whereas a heavy storm will tend to wash the oil and grime away.

And remember, if you’ve had new tyres fitted, always take it easy for the first few rides in order to allow the tyres to run-in.

As we have explained, braking causes load transfer, and the weight of your machine will become concentrated towards the front of the bike. This means that your front brake is much more effective than the back brake, and so when slowing down you should apply both brakes, but be aware that it is the front brake that is doing most of the work. You should never rely solely on the back brake when slowing down or stopping from speed.

When braking before a corner, another tip is to apply the front brake lever gently and then increase the pressure progressively. This prevents sudden fork compression and gives a smoother ride. In general, braking should be a smooth, progressive process, and the braking force you apply needs to be appropriate for the prevailing road and weather conditions.

Many Yamaha distributors run off road riding courses where you can hire a Yamaha dirt bike and riding equipment, and also receive expert tuition. Not only will you learn a lot about braking and machine control – you will also have a lot of fun in a controlled environment! For more information visit your Yamaha distributor’s website.