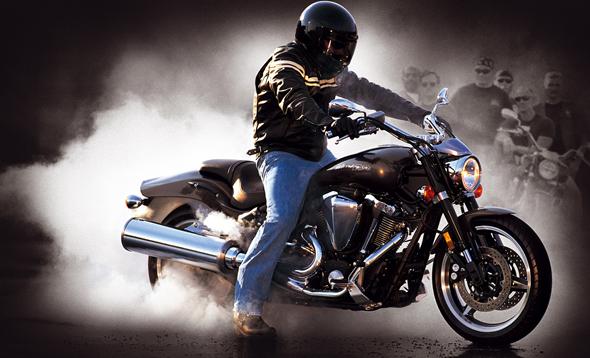 Hot Rod introduced in US: XV 1700 PC Road Star Warrior stands for a new generation of Power Cruisers with the soul of a sport bike.

Being introduced to the North American market, the warrior is a new generation of cruisers, combining the soul of a sport bike with the looks and flavor of a cruiser. With it's all aluminum frame and the high tech components, such as upside down fork and sport type dual disc brake, the bike bridges the gap between traditional cruisers and more sporty road machines. 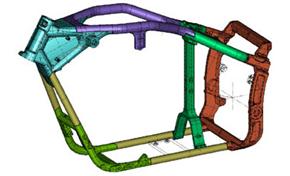 Even the shape is conventional Warrior's frame is made of aluminum.

Project leader Tatsuya Watanabe: "We liked the idea of using Road Star's big v-twin to give cruisers a new flavor. Many riders told us they had a strong preference for performance. We engineers immediately had an affinity to these needs. What we envisioned was a bike you could ride easily but still enjoy its performance."

Watanabe and his men increased the performance of the big V twin by 40% and at the same time reduced the weight by 40 kg comparing to Road Star XV 1600. Watanabe explains how the decision to use an aluminum frame for a cruiser came about: "As we were thinking to reduce weight, the suggestion of an aluminum frame came up almost as a joke at first. But after a few days of studying, members of the development team were convinced "Hey, this will really work".

With less weight, higher performance and dual brakes, upside down fork and sporty rear suspension, and a higher ground clearance when banking, the Warrior is more than a cruiser.

Hiroshi Tanaka, in charge of engine design is convinced: "If you take the Warrior for a ride, you will ask yourself - with an acceleration like this, can you still call this bike a cruiser?" 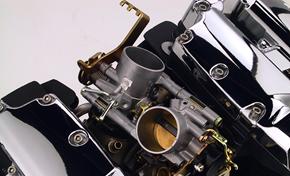 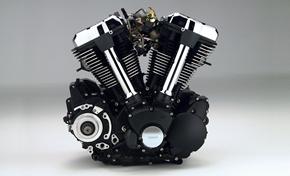 The heart of Warrior: the 1700 cc V-twin with plenty of torque 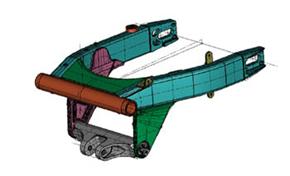 Warrior's aluminum swingarm construction is based on layout of sportbikes.

Derek Brooks, motorcycle product manager at Yamaha Motor US has been deeply involved in the product development of the Warrior. He adds: "We've been hearing from lots of riders, particularly those who grew up with sportbikes and dirtbikes, who said they wanted something more in a cruiser than was currently available - more performance and better handling in particular." Derek adds: " At the same time they didn't want to lose those things that make cruisers great, like the traditional styling, character and sound of an air-cooled pushrod V-Twin engine and a clean design that can be customized to their own tastes."

Jun Tamura, from GK Dynamics took care of the styling: "One of the basic elements of cruiser design is, how powerful you can make the engine look". The 1700 cc V- Twin looks powerful and is powerful. Based on the XV 1600 powerplant, the new engine has undergone significant changes. Next to many detail changes including an increased bore and cylinder head changes, a major contribution to the high power and torque is the new injection system. Hiroshi Tanaka explains: We were not able to fit twin carburetors in the engine's narrow V-bank." So a 40 mm downdraft type Bosch twin bore fuel injection system replaces conventional carburetors.

The large diameter 2 into 1 exhaust is one of the character features. Engineer Fumio Takatani knows, "we got comments like - it looks like a bazooka - but we kept it." This large displacement engine simply needs a high volume muffler to ensure a high output. Also to increase banking clearance for cornering the muffler is mounted rather high. With a new close ratio 5 speed transmission the Warrior engine gives a real sensation of acceleration, in particular out of corners.

Warrior's aluminum swingarm construction is based on layout of sportbikes. To give a more direct running feeling and a sense of pulse, rigid engine mounts are used. The lightweight aluminum rear arm, the upside down front fork and the optimized rear suspension damping force ensure a high level of handling and stability.

The brake system is identical with that of XJR 1300 . Comparing cruiser standards this system with its Yamaha patented single body brake calipers has an outstanding brake force, operability and operational feeling, which gives a ride on winding country lanes a new cruiser dimension.
The bike has not been introduced outside the US market.
Sven Ermstrang, Product Planner Yamaha Motor Europe: "Honestly speaking, we had a strong interest in this project from the beginning. Although the bike was under development for the US market, we thought it could really offer something new and fresh in the cruiser category in Europe, both from styling and performance point of view. However, the price of the bike seemed to become very high, so our sales people did not foresee large quantities in the European market. Those quantities did not justify a special development for the European EU2 emission regulations, which are different from the US. Personally I think that's a pity, we had a testride recently and everybody was so impressed by this bike, the engine is a real exciting 'hammer' and we think it could be very good for European people's tastes. So I think we should monitor a potential demand for Warrior in Europe."